I’ve been here for little over a week now. To be honest, I was nervous before getting on my flight. Really excited and thankful for the opportunity, but also just… genuinely terrified. This isn’t my first time making a big move or living in east Africa, but it doesn’t matter how many times I do it, packing up my life and moving somewhere new always feels like the worst thing ever. That is until I get to the new city or country, and can’t remember why I was scared in the first place.  Addis is no exception and I’m happy I got on that plane from Philly. It was really touch and go there for a minute.

My favorite things about Addis so far are my office and the food in Addis. Oh and the house I’m staying in is very cute.  And Ethiopian coffee of course!

So first, the location of my office is really awesome. All the UN agencies in Addis are located in the United Nations Economic Commission of Africa (UNECA) compound. It’s massive and sometimes confusing to navigate but steeped in history, making roaming the halls outside my office enjoyable. Right when you enter the building where IICBA is located you see this:

A 1600 square feet stained glass mural that takes up the whole wall. The stained glass wall was commissioned by Haile Selassie in 1961 when he built Africa Hall as the headquarters of UNECA. Designed by Ethiopian artist Afewerk Tekle and labeled “Africa: Past, Present and Future”, it depicts Africa’s violent history with colonization, it’s liberation and then hopes for the future.

And guess what? Africa Hall also served as the first meeting place of the African Union! I was geeking out when I first saw it and still am. Take a look.

That mural above is located in the hall and portrays the founding fathers of the AU/ leaders of the countries that were independent when the AU was formed (sorry about the lighting). The hall isn’t used for meetings anymore because the African Union has a beautiful compound which I have yet to visit. Hopefully I’ll be able to talk someone into taking me.

Besides snapping pictures of my building, my first week was filled mostly with administrative tasks; doing security trainings, getting my badge, filling myself in on all of IICBA’s projects etc.

Outside of work, I’ve mostly been eating.  I feel like I don’t have to convince or explain to anyone how great Ethiopian food is. If you’ve never tried it, no better time than the present!  My family is from Eritrea, so injera and the “stews” you eat them with have  always been a  normal part (and the best part) of my diet.   But anytime I live away from my mom, finding Ethiopian/Eritrean food that is good enough is a real struggle (Philly, I’m looking at you). Until I came to Addis. First, it’s obviously everywhere, but it’s actually good everywhere! UN cafeteria? Amazing. Little restaurants on the street? Phenomenal. The touristy cultural center? To die for. It’s actually a problem how readily available and good it is. I have no self-control.

Besides eating, I did some exploring over the weekend. Saturday was filled with shopping for traditional dresses with my cousin who was in town for the week.  Cultural clothes, depending on ethnic group, can be similar in Eritrea and Ethiopia. The main reason I chose my internship in Addis was so I could replace the dresses I have and stunt back home.  Just joking! Kind of.

The shop owners didn’t want me to take photos of the dresses, but one guy was nice enough to let me take a picture of this one I like. 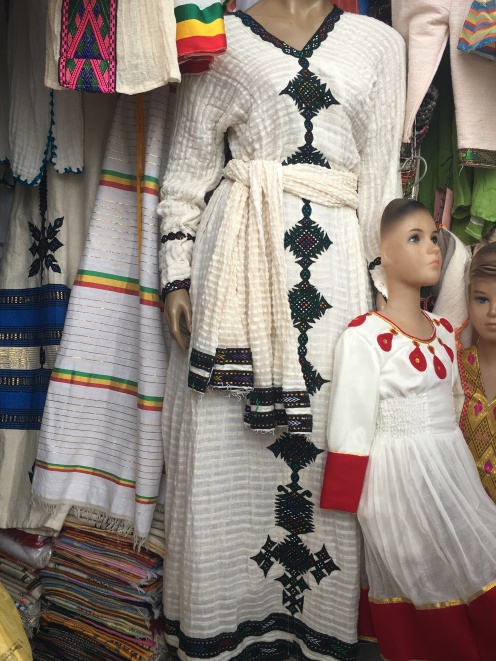 On Sunday, I went to Addis Ababa University with the two other interns from my office to see the campus and go to the Ethnological Museum. The museum used to be a palace of Haile Selassie and the campus, his palace grounds. The campus is beautiful with gardens everywhere. I unfortunately only took a picture of the entrance to the campus and not the gardens.  I’m notoriously bad at taking pictures,  but just take my word for it, the campus is beautiful.

Besides a week filled with new experiences, new people and excitement, it has also been a very emotional time. You may have seen on the news (or not) that Eritrea and Ethiopia have finally ended a 20-year border conflict. Just a little background information, Eritrea and Ethiopia fought a 30-year war from 1961 – 1991 that started after the Italians were pushed out of the horn of Africa by the British during World War II and Eritrea and Ethiopia were made into a federation. That war ended with Eritrea’s independence.

After the end of the independence war in 1991, another war began in 1998 over the border between the two countries. The standoff between the counries was finally resolved by new Ethiopian Prime Minister Abiy Ahmed and Eritrean President Isasis Afwerki in the last couple of weeks.

Countless lives have been lost over this border dispute and families have been separated for two decades. The border closed in 1998 and flights were stopped and phone lines between the two countries were shut down. It is very common for people to have family in both Eritrea and Ethiopia. Since the beginning of the border war, a number of Ethiopians and Eritreans have been unable to see or speak to their family; children, siblings, spouses, cousins and others have been separated for twenty years.  Being here for the end of the war, has been a once in a lifetime experience.  The streets have been filled with people celebrating and everyone, including myself, elated that the conflict between the two countries has finally come to an end. The headlines say end of a 20-year war, but really the two countries have been in some type of conflict since the sixties and to finally have peace for Eritrea and Ethiopia feels unreal but tremendous.