The past two weeks have been interesting, as it is the first time that I have ventured out of Nairobi. Being a part of a program monitoring and evaluation team, I have been witnessing some of the ways in which learning is measured (mostly through literacy and numeracy). As we traveled to Nakuru, a small town in the North-western part of Kenya, I was struck by the lush greenery and the magnificent view of the rift valley. We had chosen 10 different schools around Nakuru to perform a test-retest of the tools to measure program impact. The schools in Nakuru were beautiful, they had a huge space of play area, most of the schools were surrounded by hills, the abundance of fresh air and silence made it a healthy, safe space for children to grow in. These schools were a better environment for the children than the ones in Nairobi due to congested classrooms and lack of infrastructure.

As we visited low-income private schools and public schools every day, I was surprised by the dedication and sincerity of the educators here. All the head teachers and the teachers were interested in the improvement of the pupils through our programs, and we had the opportunity to capture qualitative data from them. As we explained our work of data collection and program evaluation, I realized how important it was for the educators in schools to understand these programs and its effects from multiple perspectives and not just from a viewpoint of teaching the curriculum (as in most cases).

I was also intrigued by some of the methodologies used in schools to promote student engagement, they were like the ones I had used in my own classroom during my time as a teacher. Some of these schools created friendly spaces for children(talk-boxes), interactive classroom procedures and schools also had rehabilitation centers for special children, which made me happy that these spaces were allocated for them for extra tutoring, child-friendly visual charts, and toys.

As always, with a couple of friends, we traveled to Lake Naivasha on a weekend, visited and trekked Hell’s Gate, a series of naturally-made caves formed by hot springs and volcanoes many years ago. The ‘Pride Rock’ from the movie Lion King and a scene from the movie Terminator were shot here. We also caught glimpses of zebras and giraffes and these animals seemed to be living amongst people (I know right!). We went on a boat ride at Lake Naivasha and saw many birds and the Hippo (I have never seen these animals freely moving, and in such proximity). In Nakuru, we trekked the Menengai crater, a 4-hour trek through which I had the chance to know my team members better and interact with them outside work premises.

Kenya is indeed treating me well, it is a holistic cultural experience and the hospitality is amazing. It also helps to be an Indian, because Nairobi has a vast majority of the Indian population (Yes, Indians are everywhere), that the locals mistake me to be a Kenyan and start interacting with me in Swahili. This has surely helped me to experience the culture as an insider. As I spend more time here, I am also experiencing the patriarchal traditions and behaviors in the country that are seen in people even today, and the ones who question it are few. Nevertheless, look out for the next blog, where I wrap up my experiences in this wonderful country! 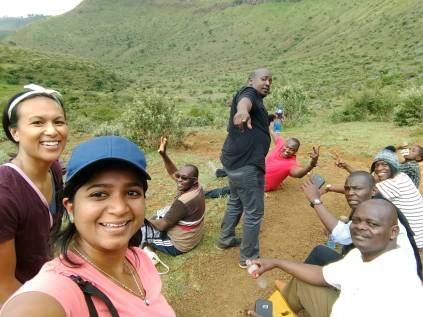