صباح الخير [sabah alkhyr], or good morning from Amman, Jordan! Sadly, after a week that’s still about the extent of my knowledge of Arabic…and it’s not even morning right now. And full disclosure: I had to google the correct romanization after learning it phonetically from my Uber driver (more on that later). I originally had it typed in my phone as “saba alhair”– you can go ahead and laugh.

This is the first time I’ve lived in a country where I didn’t speak the language, and I’ll admit I was (and still am!) quite nervous about it. But for better or worse, a lack of (local) linguistic expertise has hardly affected my daily operations either at home or the office. This isn’t necessarily because Jordanians are great at English– which I can neither confirm nor deny based on my very limited interactions over the course of a week– but rather due to my date with destiny with Japan. Yes, you read that correctly: Japan.

You see, Japanese was my major in undergrad– 7 years ago! I thought I was done with the language after graduation, but I guess it wasn’t done with me. By some weird coincidence, after requesting UNESCO Amman for my internship placement I learned that I’d be helping their office support education project proposals for the Japanese government. The head of our department is Japanese, and I’ve already visited the Japanese embassy here on a liaising mission. And the coincidences don’t stop there: my roommate, who I randomly connected with via Facebook, is also Japanese. Seriously! What are the odds? So far I’ve already met two of her Japanese friends, made okonomiyaki (Japanese pancakes), and drank umeshuu (plum wine) together. It’s been a weird culture shock and blast-from-the-past all rolled into one. And one last (or is it?) coincidence: her cat, who I now live with, used to belong to the UNESCO office here. Apparently, our Japanese Education Programme Specialist is also a friend and reached out to my roommate when Raqmu needed a new home. It’s a small expat world out there, as I’m learning.

This is Raqmu [the original name for Petra, an archaeological city that is Jordan’s main tourist attraction]. Isn’t she cute? I haven’t actually visited Petra yet, but maybe this is good enough for now.

So what am I doing at the office? Well so far, I’ve visited 3 embassies in 7 days: Japan’s, Korea’s, and the U.S.’s, in order to take strategic meeting notes. Basically, UNESCO Amman hopes to fund a variety of initiatives supporting education for youth Syrian refugees, including scholarships for TVET (Technical and Vocational Education and Training) at local universities and optimization of Jordan’s nationwide education management information system. Don’t worry if that sounds like a lot of buzzwords to you– I’m still playing a bit of catch-up myself, and to be honest I’m not sure how much of this information I should even reveal. But from a strictly infrastructure point-of-view, I have learned the following: 1) The Japanese embassy is a maze of staircases and doors- our Japanese department head who has visited multiple times still got lost; 2) The Korean embassy is highly air-conditioned. Very refreshing!; and 3) The U.S. embassy looks like a military compound from the outside and a Marriott hotel from the inside. No joke: it is surrounded by fully-manned tanks and you pass through two security checkpoints before entering a spacious lobby with stone floors and a fountain. None of the three embassies allowed cellphones inside, so instead here is a photo collage of the UNESCO office. This is where I return to type my handwritten meeting notes, and also generally where I will be working each day. Note the almost-shrine they’ve constructed in the entryway to the UN’s Sustainable Development Goals (bottom right picture). Now that’s commitment! 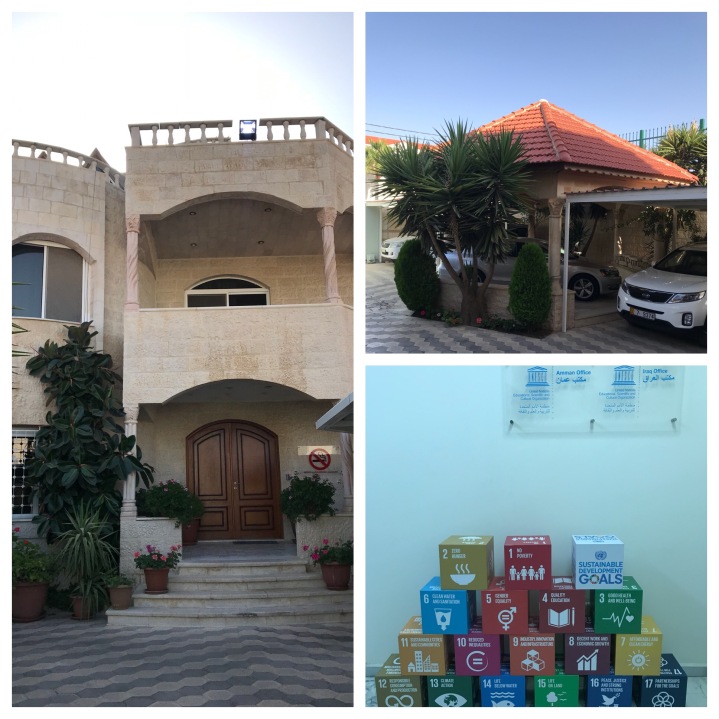 One of the true highlights of my experience so far, however, has been my experience with my new roommate. And I’m not just writing that because she told me to (which she did, because she’s a treasure) or because she’s introduced me to Raqmu. She has been an absolute lifesaver, starting from the first 48 hours of my arrival when all of my luggage was lost in transit and she took me to H&M at the mall (what can I say, so far my time here has been less-than-“Jordanian”). Since then, she’s taught me how to buy all of my groceries and have them delivered via app (thank youuuuu modern technology); given me lots of food for thought on her impressions of refugee issues here (she works for UNHCR); shown me my new favorite cafe (which– another coincidence!– is also named Raqmu, like our cat); and fed me my first “real” Middle Eastern food (muttabal yasss) before taking me around downtown Amman’s Roman amphitheater. A pretty awesome human being and/or life-guide, on the whole.

I suppose that’s the long and the short of my time here so far. Hopefully by my next post I’ll know a little more Arabic, or at least have visited another embassy whose architecture I can additionally comment upon. Until then, sayonara! 読んでくださって ありがとうございます (thank you for reading)!

One thought on “Jordan or Japan?”