Hola, I’m Ale, I have been in Santiago de Chile interning at UNESCO since June and I have about 50 days left. I am wide awake on a 9ish hour flight and thought it would be a good time to share a bit about my work and life here these past few months!

In June, I started my internship at UNESCO’s Regional Bureau for Education in Latin America and the Caribbean, known as OREALC/UNESCO Santiago, in the Education 2030 and Culture Education programme areas (British spelling is funne). 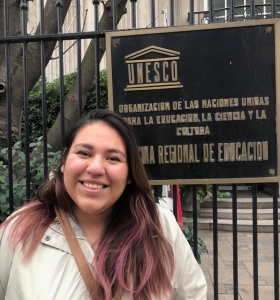 Being an intern is a mix of things, but most of my day is spent on the computer completing tasks or ‘missions’ for my supervisors (next post), reading as much as I can about UNESCO things, or translating things for the education specialists and admin. Remember in 4th grade when you learned the parts of a letter? Yeah, lil 4th grade me is excited that this random knowledge comes in handy when you are given 15 mins to translate something fancy for someone fancy and the formatting is all off. Also, they don’t do the oxford comma here, which is such a hard thing for 4th grade me to get over.

Interning is about the experience, about putting what you’ve been reading/writing/discussing/lightly crying into your 3am cereal bowl for 2 semesters into practice, or at least into understanding as you observe or assist others putting it into practice. It feels like Student Teaching all over again, except there is no lesson plan or timed out schedule week by week. That was like wading into a lake, progressively taking on class by class until you are doing it all for a bit then slowly clawing your way out. This is like a tropical storm of heavy, long work days mixed with suspiciously mild mid mornings where my inbox is silent and am knocking on people’s doors for something to do.

When the tropical storm hits it arrives with minimal warning and my brain is flooded with words and UNESCO phrases in English and Spanish as I work on drafting things or translating things or making sure translations are parallel within UNESCO language. Most of July was taken up by preparing documents and planning group meetings to prepare for a bigger regional meeting at the end of the month. Renny, my office buddy, was also preparing for an event that was the same week as the regional meeting. We would check in with each other throughout the day and throughout the process, cheering our small victories along the way.

June and July were my worst months- I messed up a lot, I hated myself and was over apologizing for everything (sorry Dr. GK), and Renny was always there ready to order food and say ‘How you feeling girl?’ or give a sincere ‘thank you’ for something tiny because I hadn’t heard it in a while. [i miss you come back] It got better, I stepped back and reevaluated my perspective, re- and re-re-read everything, and reassessed what I was good at and what I needed to work on. It was also pointed out to me that the learning curve for one of the sectors I was working in was high and, honestly, it wasn’t until 3 weeks ago that I sat through a discussion and realized that I understood EVERYTHING [yay forgiving yourself and yay small victories]. Now that I have only 1.5 months left, I have gotten used to the pace and there are so many projects happening and opportunities opening up. (more on this at the end)

In total, there were 5 interns working in the office, we were all working on different projects under different people but shared the same affinity for food and pisco sours. Renny and I were given a large office space with a little table where we all met for lunch. We get an hour lunch every day, except Friday when the office closes at 2:00. Or 2:30? (To be honest I am not sure because these days I never leave on time and frankly I am too afraid to ask now) On Fridays we would venture off somewhere for lunch and drinks, usually somewhere with outdoor seating and dog watching, to talk about school and life and whatever else.

On weekends we made most of life in Santiago, visiting the sights and trying out different restaurants. This city is amazing! So many food options, so many neighborhoods and pockets to explore, all with great public transport. Chilean food is…interesting? Good, but beware the copious amounts of mayo and the lack of spice. It redeems itself with the abundance of avocados! AVO ON EVERYTHING, ITS NOT EXTRA! This isn’t the cheapest city, but manageable. Nightlife is great too, everything from pubs and karaoke to clubs and salsa dance halls. We did a day trip to Valparaiso and Viña del Mar, which were magical. Valparaiso is colorful and happy and hilly, SO MANY DOGS.

That’s actually a fun surprise, Chilean dogs are often off leash and always with a fleece sweater on in the winter. I’ve befriended a couple at the plaza near the office and a few that frequent the cafes I go to in my neighborhood. My neighborhood dogs are very extroverted, and I LOVE IT. I am staying in a nice part of the city, not the nicest but nice enough for me to rearrange my living budget. Its worth it; my roommates are awesome, and we live off of a main road dotted with restaurants and cafes. And did I mention the dogs?

The office is in Providencia, another great neighborhood, a 20-ish min metro ride away. The office space is an old house divided into wings and my office is in the “East Wing”. Renny and the interns left at the start of the new school term so I had my own space for a while, up until last week when a new office buddy moved in. This is my first straight office job and it took some getting used to. Then there was the language component, like the Spanish keyboard, software, even email took some practice.

Two Smiles and a Frown

Frown: Truthfully, speaking and staying in Spanish at work is difficult, which is weird to admit given that it is my first language, what I studied in undergrad, and the one that resonates in my mind when nervous, doing math, or practicing a new language. When I’m outside of work I speak it without thinking, even in situations when there are majority English speakers, but something switches off when I’m around coworkers and suddenly I am stuck in 2 tenses and chained to 3 verbs. The main specialist I work for knows English, as do the people I work usually with, so I can play the Spanglish boundary but its lazy. And frustrating. And something I am trying to figure out.

Smile: It is strange going from one of three then five interns for a couple of months to suddenly being the only one. I haven’t been without a built-in buddy system in a new workplace and city in a while. But this has been a positive change; it forced me to try new things, make new friends, and really explore what I like about this work. Meeting people in a new city is hard, but my Chilean friends make it easy. Birthdays, festivals, random outings, and solo trips have filled the weekends I feared would remain empty and lonely.  It took a few days to settle into a new routine and get used to a quiet “East Wing” but, thanks to projects picking up and a reshuffling of office personnel, I didn’t have more than a few days to feel the calm.

Smile: Culture, the programme area I really like, is doing some great things- a couple of which I have the privilege to be a part of! One is a regional study on Intangible Cultural Heritage in Education, which is leading to a regional guide for teachers. It is also the reason why I am on this first of two 9 hour flights- I am headed to UNESCO Headquarters in Paris! For a meeting! On all this stuff! And I’m excited! I’ve been involved in preparing presentations and coordinating between our office and the regional office for Culture in Havana, but I don’t want to give too much away (And I have VEEP and Killing Eve to finish) so I promise to write all about it on one of the two 9 hour flights I have next weekend.

One thought on “Hola desde Chile”