Sesame Workshop has given us basically no work. Our on-going petitions for work have been met with empty promises and trite excuses since really before we even arrived to the office. It all finally made sense a few days ago. The education/research/content teams had been dissolved and mass lay-offs in the office took place: our three supervisors became one. The remaining one stayed true to form and kept us in the dark; we had to learn about it all from people who’d been fired and returned to collect their belongings. One of them being our former supervisor who confessed, “I wanted to warn you and tell you to look elsewhere but I couldn’t.”

Living in Delhi certainly demands its share of adjustments- not the least of which is the mass carousal of people in all directions at all times. This trend translates even into smaller spaces. For example, overnight buses tend to have beds and should you chose to reserve one, you are likely to be assigned only half of a twin bed, the other half belongings to a total stranger. I learned this the hard way.

You know when you’re in the sauna at the gym with your phone and it gets so hot that it disables until it can “cool down”? That happens just by being outside in Delhi for more than 10 minutes. The heat is only slightly more aggressive than the stares, though.

In most spaces I occupy, I am the only shore person, and the remaining occupants make sure I know it. People’s eyes unabashedly affix to me and usually stops there but it’s gone as far as asking to touch my blonde hair. People ask to take pictures with me at least once every other day and I’ve abridged, until recently.

See, the reason behind the pictures stems from a certain type of coolness and almost fetishizing of whiteness. If I take the picture, I contribute to the cycle. If I don’t, I, a white person, am telling a person of color that I don’t want to be seen with him or her (even when that’s not my intent). Until I figure out what’s the “best” way to negotiate my feelings on the matter, I’ve adopted a new policy: you want my picture? Sure! I get yours too. While it may not feel punitive, my hope is for people to feel like I’m as excited to see them as they are me.

Despite some hiccups with accommodations early on, my newest (and final?) home in India is wonderful with the exception of four flights of stairs to scale every day. My favorite part is it’s juxtaposition to the metro and activities, such a movie theatre where they had one matinee showing of the Aladdin remake left and we caught it! Pro tip: See Aladdin in India, but beware- movies have (unannounced) intermission. How dare they interpret “You’ve Never Had a Friend Like Me”?!

Speaking of,  Pro tip: Get you a friend like La India. Nobody can negotiate a price or navigate transportation like her. This whole trip has been a rollercoaster so far but having her as a constant has been so grounding. It takes a special kind of friend to tolerate all these handstand pic requests. 🙂 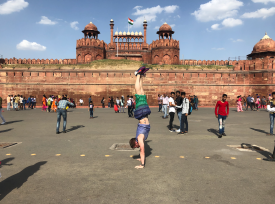 4 thoughts on “A Whole New World”