I’m once again so fortunate to have another cohort mate of mine, Morgan, this week to share her experience of learning about different cultures at IEDP! As you can see from the series of the guest posts, my cohort mates are super enthusiastic about sharing their experiences here. And you will feel that enthusiasm in every part of this post… so enjoy!

Yes, hi, hello! I am so excited to guest post on the IEDP blog about culture!

To whoever is reading this, if you’re on the edge about coming to Penn, I hope this post will add significant PROS to that lengthy PRO/CON list we all know you have on the white board in your bedroom.

For starters, I should mention that I identify as a white female Kansan. Kansas, you guys. Middle of America, they literally call us “the bread basket of America” – I’m about as white as they come.

I’ve spent some time in Spanish-speaking countries and I’ve worked with Spanish-speaking communities in the United States but as far as my identity is concerned, the Spanish-speaking part of me is something I’ve developed over time, not something I was born with. Upon arriving at Penn, I had no idea how badly I would want to immerse myself in all the cultural practices of my peers. I am deeply grateful to dear friends in the cohort for sharing pieces of their lives with me and for answering all of my questions.

Here is my advice for making the most of allllll the wonderful cultures represented at Penn.

At first, I didn’t feel like it was my place to be attending parties for “Indian Club” and “LatinX Club” but, like I said, I’ve found that people WANT to share! If I am invited into a space, I try to always say YES! 🙂

At the first Indian Club party of the year, I was introduced to my new favorite dessert and as I nibbled on the soft, sweet goodness, I chatted with a friend about her practice of fasting for her husband on special days as well as other traditions from her childhood. 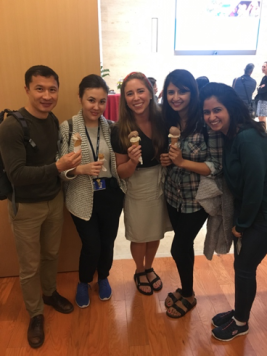 Pages and pages of my college-ruled IEDP notebook are filled with notes from interesting events and speakers that have been featured at the Perry World House. The name itself just makes it sound like an intriguing place to hang out. Also, they have the best food at events… peep the ice cream 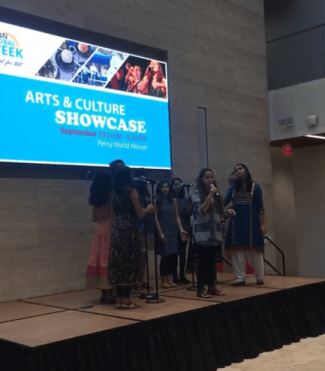 There was an Arts and Culture show to kick off the year! Turns out, Penn has a cappella groups that sing in many different languages!

I’m also kind of a film geek so I love attending documentary film features with other IEDPers at the Perry World House. This is a picture of Loung Ung answering questions from the audience after a screening of her story “First They Killed My Father” about the Khmer Rouge in Camboida. Although it was a heart wrenching film, it was funny to note that during the Q&A, Loung referred to the film’s director, Angelina Jolie, affectionately as “Angie”. 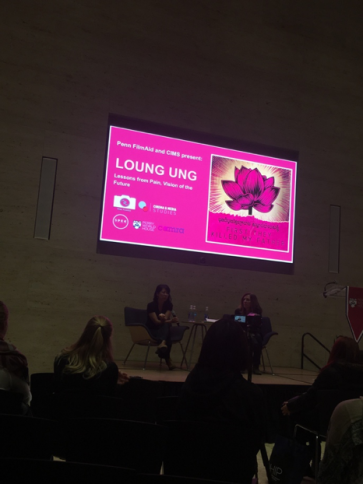 Just this past weekend, a friend in the cohort hosted a Hanukkah party! My first! I was so honored and excited to participate in something that holds so much meaning for someone I care about!

The terrible cartography you see below is a picture of a page from my notebook. I was following Brexit coverage on NPR and I wanted to better understand the intricacies of the situation. I will be forever grateful to a friend from Scotland that sat down with me for about 15-minutes to help me draw this map and to share her thoughts. I’m sure I could have learned these things on YouTube but because I am personally connected to someone directly affected by these decisions, they seem that much more significant. Haha, I just realized you can also see my note from the time I learned about DESI land 🙂 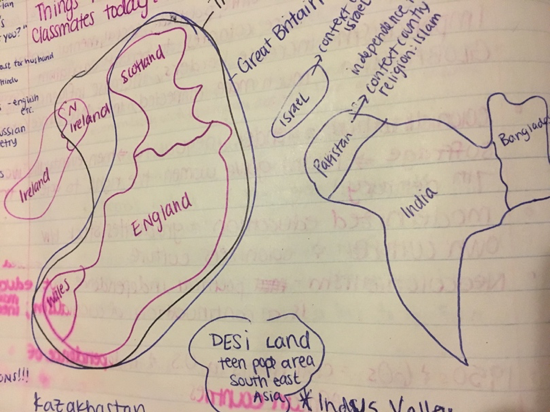 This is the experience of a lifetime. Before, when I looked at a world map, I saw large colored labels and capital cities. Now, I see the hometowns of my friends, and current events affecting people that I love. Sharing and enjoying various cultures has helped me to remember places because of memories I associate with that place and too see beautiful connections where I used to only see borderlines.