After 20 hours of travel (10 of which the person beside me on the flight loudly snored through), I arrived in Johannesburg, South Africa! Dragging my 49.5-pound suitcase and my broken carry-on, I finally found the driver that the organization I’m interning with sent to pick me up. He laughed and said that I looked nothing like my picture—and trust me, he was right. I had been awake for over 24 hours at that point. I was immediately captivated by the character the filled the sides of the buildings that lined the street, and throughout the drive home, I was surprised to find that each block seemed to have its own look, with no two blocks looking the same. I’ve lived in cities full of character before (ex. Washington D.C. and Philadelphia), but this one felt new and exciting.

Even though I typically struggle with change, everyone in Jo’burg has made this transition so easy! I’m living in a co-worker’s guest house, which has been great. We’re in the suburbs, yet still so close to the hustle and bustle of downtown. My ideal situation. It’s so nice to actually see grass after living in a high-rise apartment for the last year! The view of the pool right outside my window doesn’t hurt either. Once I finally beat the jet lag, read an entire book, and accidentally caused a small fire on a portable stove, I began spending most of my free time with my host family.

It’s been so comforting to feel like I have a home-away-from-home. We’ve bonded over a love of cooking shows and ping-pong, and they have committed to being my personal tour guides throughout the summer. This week, my host family introduced me to Norwood Mall (literally a mall full of grocery stores—it’s incredible) and Malva (pudding cake). It’s especially nice to sit outside and eat a slice of Malva, sip on a cappuccino, and watch a rugby game on the big screen at Melrose Arch. It reminded me so much of my life in Washington, DC (minus the rugby). On Friday, we celebrated a family member’s birthday, and I met all 23 members of the family! Anyone who knows me knows that 23 people is about 20 too many for me! However, every single person was so welcoming and made me feel included in the conversation. I walked back to the guest house so content—partially because of the fact that I had eaten real food for the first time in days (due to the portable stove incident) and the fact that I had been so warmly embraced by an entire family. 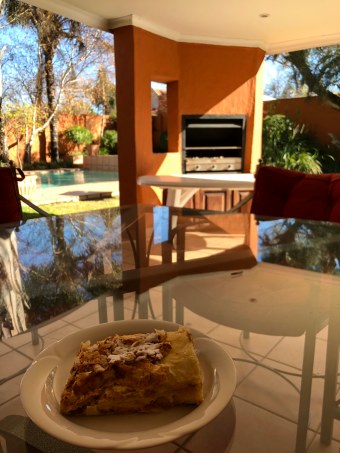 Unfortunately, I am officially entering what seems like my ninth consecutive month of winter! Everyone says that winter here is sunny and mild, but it has been mostly cold and/or rainy since I got here. So, you can usually find me hibernating under a blanket in my spare time. Homes in South Africa don’t have heating systems, so I’ve been VERY cold, but that’s nothing that several small heaters, thick blankets, sweatpants, and two pairs of socks can’t fix. Well, except for right now. The power has been out for several hours, so I’m actually freezing underneath my two blankets. Once the power turns back on and the rain stops, I’m looking forward to exploring! This past weekend I went to the African Craft Market and somehow restrained myself from buying all of the gorgeous paintings.

Everyone at the organization I am interning with has been so welcoming! Everyone laughs at my ridiculous touristy questions and lack of familiarity with instant coffee, and at some point, they all began calling me by my new nickname, Nic. The organization is doing incredible literacy work in primary schools throughout South Africa, as they were the first organization to create leveled texts for grades R (age 5) through three in all of South Africa’s 11 official languages. I am so excited to be involved in their work this summer (I mean, winter)!

Throughout my time in South Africa, I will be working with the Research and Development Unit within the organization. I began my week by reading a Request for Proposals (RFP) and providing feedback on a technical proposal (shout out to Dr. GK for preparing our cohort to do this), completing a literature review to accompany the technical proposal, and now I am working on designing phonics cards to accompany a set of guided readers in Isizulu, one of South Africa’s indigenous languages. I’m attempting to learn all of the many digraphs, trigraphs, and blends in the different languages, so I’ll update on how that goes in my next post! One of my co-workers is determined to teach me two Zulu words a day so that we can have a conversation in Zulu by the end of my time here. Wish me luck! 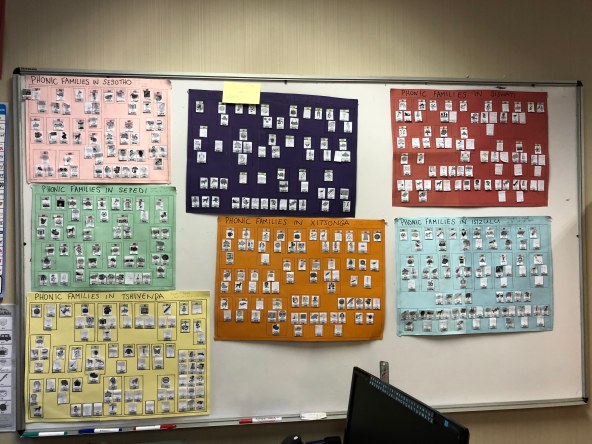 Phonic families in 7 of the 11 official South African languages.

That’s all for now. Talk to you soon!